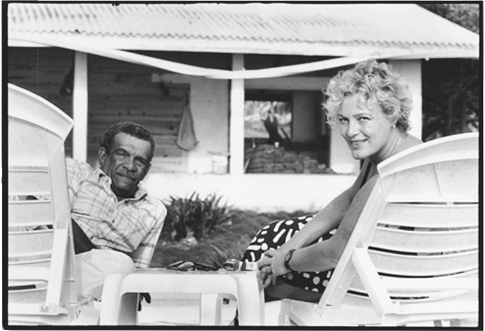 One of the saddest things I ever saw was an elephant padding along a tree-fringed shore near the tourist resort of Anse Chastenet on St. Lucia. A millionaire’s amusement, the slave tusker was held on a long chain between two of those twisted trees, and swung his trunk lamentably in rhythm with his ancient bulky tread, domed pate straight ahead, too grandly tragic to bother with our self-indulgent, useless, boat-bound sympathy. I thought of Derek, whom I had read in thunderstruck pleasure, but not yet met, not, I hasten to say, as the alter ego of the shackled jumbo but as the only writer I could think of who could trumpet the animal’s rage and while he was at it, help me murder the millionaire. Walcott is himself a beast on an ocean shore but as you’ll notice from these pictures of himself and Sigrid, of a distinctly leonine cast.

When we did finally meet up, in Boston in the mid-80s, that citadel of wintry distinction seemed to me the last place he would want to be. I took Derek to be of the Craft, the historian’s that is, and the right kind, the unsentimental bard; who had taken the savagery of time’s doings right into his bones. Herodotus and Walcott would have got along and for all I know they already have. Derek grew up Methodist but was gleefully corrupted by the savour of an island patois-sung Catholicism that never lost its pagan animation. His churchbells are the “moaning conch” sounded through the giant ferns and over the baby volcano with its gaseous burps and leaks. For Walcott, classical disciplinarian of metre though he is, there with Homer, Virgil, and Dante, history is a purposeful dishevelment, a wild throw in the air, landing bleached on the beach, salt-filmed, rinsed by the hard island rain that hammers through his lines. He seems much given to the mirror, but always with aan unsparing self-regard at the “knotted white hair”; the cordage of veins; life’s merciless mottling. But he must like these images Judith has caught; for they set him where he needs to be, in the hot island light; beside Sigrid. And from the expansive, deadset strength he squares before the lens, it’s an easy thing to infer the landscape beyond the frame: the twisted sea-almond trees, the “crusty grouper, onyx-eyed . . . weighted by its jewels like a bald queen” swimming off shore beneath the “uncontaminated cobalt”; peeling pirogues on the sand.

Walcott is the most painterly poet and a poetic painter and his peregrinations are made with chums who include Tiepolo, Pissarro, Claude and Turner, his image of that last painter’s “drizzling twilights” better than anything Ruskin contrived. you can travel with him into chilblained London; the Greenwich Village stoop where he was once beaten by punks and concluded that while that might have been an episode of American youth, “if love’s that tough I don’t want it”; to limestoned Mantua or the banks of the Ganges.

 But the Prodigal returns, always to the island and its “uncouth features”; the “onions, jackfish, bread, red snapper”; to the “wires of rain” and twine-twists of “casual”roads; to Castries whose acrid burnings he holds in his lungs; to the place where at fourteen “I drowned in labouring breakers of bright cloud” and was possessed by an infallible sense of what he had to do. Lucky us.